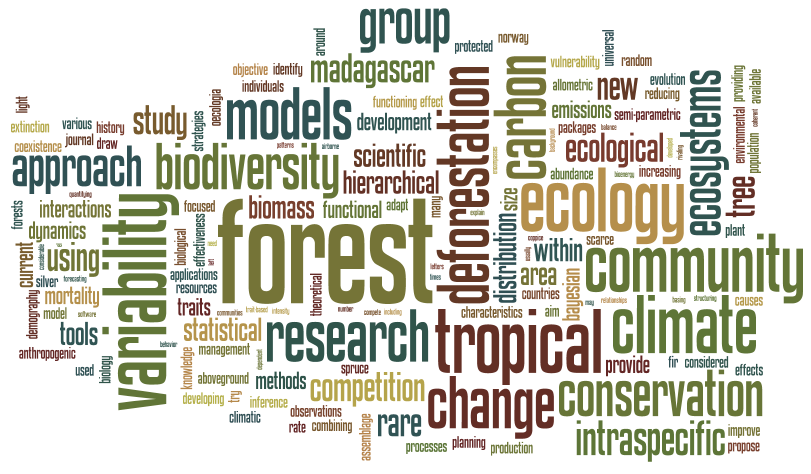 In ecology, a community is an assemblage of populations of two or more different species occupying the same geographical area. Community ecology encompasses the study of the interactions between species in communities on many spatial and temporal scales. This includes the distribution, structure, abundance and demography of species interacting in the community. Within our research group, we are mainly focused on forest ecosystems and assemblage of tree species. While increasing scientific knowledge on forest ecosystems, our objective is to improve forest management and enhance forest ecosystem services (wood production, biodiversity, carbon sequestration, etc.).

Species can compete with each other for finite resources (e.g. water, nutrients or sunlight). Competition is considered to be an important mechanism determining population size, biomass and species richness in the community. Through our research, we try to identify the strategy of each species regarding competition for resources in the community basing our studies on species traits, demography and phylogeny. Selected references: [3], [4], [12], [22].

A rare species is a group of organisms that are very uncommon or scarce in a community. In tropical forests, where the number of species may be greater than 100 per hectare, many species are rare and represented only by a few individuals. Knowledge about these species is usually scarce. This is problematic as to understand the functioning of the community, we need information on the behavior of each species. In our research team, we develop approaches to make the most of the few observations that is available for rare species. As an alternative to the approach by group of species or the approach by functional traits, we investigate the interest of using hierarchical mixed effect models to characterize rare species. This type of models is a compromise between a theoretical and biologically coherent average model for all species and a species specific model estimated from the few observations for each species. Selected references: [twoe], [6], [18].

Conservation biology is the scientific study of the nature and status of Earth’s biodiversity with the aim of protecting species, their habitats, and ecosystems from excessive rates of extinction and the erosion of biotic interactions. Land-use change and climate change are two main threats to biodiversity. Through our research group, we try to provide tools for conservation planning with the aim of reducing tropical deforestation and adapting to climate-change.

Tropical deforestation is responsible for a major decline in biodiversity, for a considerable proportion (6-17%) of global carbon dioxide emissions that affect climate change and is the first step toward land desertification. Around 13 million hectares of tropical forest are deforested each year around the world. The REDD+ programme (Reducing emissions from deforestation and forest degradation) has emerged as a new potential to curb deforestation in developing countries combining both development and conservation actions. Our research group work at providing accurate estimates of carbon stocks in tropical forests and identifying the social and environmental causes of deforestation to improve conservation planning. Selected references: [phcfM], [9], [11], [14].

Biodiversity is affected by current anthropogenic climate change. Although throughout Earth’s history the climate has always changed with ecosystems and species coming and going, current rapid climate change affects ecosystems and species ability to adapt and so biodiversity loss increases. The current extinction rate is now approaching 1,000 times the background rate rivaling the five mass extinctions of past geologic history. Within our research group, we assess the vulnerability of tree species or forest-restricted animal species to climate change. Using species distribution models and projecting species distribution under future climate, our objective is to identify climatic refugea area for biodiversity. Using biodiversity maps, we propose conservation strategies to adapt to climate change, increasing the effectiveness of present protected area networks. Selected references: [hSDM], [15], [24].

Statistical models can be used to draw inferences about the ecological process or population under study. Inference is a vital element of scientific advance, since it provides a way to draw conclusions from data that are subject to random variation. Models can then be used to forecast ecological processes and provide support to managers for decision making. Within our research group, we work at providing new statistical methods and tools to solve methodological problems associated to the analysis of ecological data-sets, thus offering opportunities to provide new answers to scientific questions in ecology.

To do so, we are particularly focused on the development of hierarchical Bayesian models. Statistical methods and tools we propose are frequently compiled in packages available for R statistical software. We developed various methods and tools for modelling anthropogenic deforestation (phcfM), species distribution (hSDM) and tropical forest dynamics (twoe). We also contributed to the development of functions for parameter inference in a hierarchical Bayesian framework that have been included in packages with broad applications (MCMCpack). Selected references: [hSDM], [twoe], [phcfM], [1], [14].